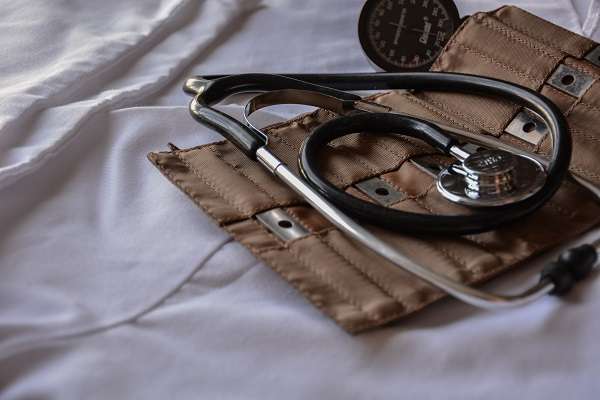 Toward the end of HEART OF THIS FAMILY – Lessons In Down Syndrome And Love, I write the following: People. It had always been about people. The right people dropping into Steve’s life at just the right time. Individuals, not systems, had moved Steve forward in his life.

Doctor Bill Boyle, our family’s pediatrician during the years we lived in Hanover, New Hampshire, was one of those people. Steve’s brother, Mike, recalls him as “…the most generous and empathetic doctor I’ve ever experienced.” The excerpt below, which takes place one night in November of 1983, provides a glimpse of this remarkable individual.

“Mom, wake up! Something’s wrong with Steve. He’s bleeding all over!” Mike’s almost sixteen-year-old face was inches from mine, his eyes wild with fear.
Roger, the boys’ dad, lived and worked in Albany, New York during the week so I was on my own. I followed the ambulance to the hospital.
Steve lay in a curtained treatment cubicle. A pale blue hospital gown replaced his bloodstained pajamas which sat in a tangled heap on a nearby chair. Medical personnel clad in white hospital scrubs clustered around my son, stethoscopes slung carelessly around their necks. Clear fluid dripped from an IV bag through transparent tubing into his left arm.
A few minutes later, a hand flung aside the cubical curtain. “Steve!” Dr. Boyle’s voice boomed. “What are you doing here? The hospital called and told me you said to get over here quick! You woke me up!”
Startled, Steve focused his eyes and replied, “I sorry. I all bloody. I scared.”
“Lemme have a listen, buddy.”
Bill, a close family friend as well as the boys’ physician, rubbed his hands over the chest piece of his stethoscope to warm it, before gently reaching inside the hospital gown to place the diaphragm over Steve’s heart. As he bent down, a shock of reddish-brown-turning-to- silver hair fell to the side of his high forehead, momentarily hiding the ever-present twinkle in his blue eyes. After listening intently, he straightened his sturdy frame and looked at me. “So… tell me what happened.”
I took a deep breath and replayed the scene in Steve’s bedroom. Bill listened without interruption. Compassion flooded his ruddy Irish face. When I finished, he said, “Sounds to me as though you, Mike, and Josh all did a great job under pretty trying circumstances.” Then he explained he needed to talk with the emergency room physician and review preliminary test results.
When he returned Dr. Boyle informed me he was going to have Steve, who’d drifted off again, admitted to the hospital. He insisted I return home, check in with Steve’s brothers, and call Roger. He also promised he wouldn’t leave Steve’s side until I returned.
Dr. Boyle followed Steve closely and after several days released him. He stated that test results, done during Steve’s hospitalization, indicated the congenital heart defect he’d been born with may have caused the sudden hemorrhaging. He assured Roger and me once he’d concluded gathering information, he would call us and discuss next steps.
On Saturday morning Dr. Boyle met us in his office. I perched on the edge of my seat, clammy hands closed into tight fists, my heart pounding. Roger sat next to me, his face taut, lips pressed together in a thin line. He reached for my hand.
Bill leaned forward, glasses perched on his nose. The collar of a blue pinstriped broadcloth shirt peeked above his navy wool crew-neck sweater, an elbow poked through a hole in one of the sleeves… “There just isn’t much research on Eisenmenger’s, especially with patients in Steve’s age bracket.”
I knew what Bill left unsaid; most patients with Eisenmenger’s didn’t live as long as Steve had lived.
Bill continued, “But I’ve consulted with specialists in other hospitals and we’ve come up with a plan. I just don’t know if it will work.”

In the process of writing HEART OF THIS FAMILY, I traveled to Hanover to meet with Bill Boyle in the home where he and his wife continue to reside. I asked him to explain the specifics of the treatment protocol he and his colleagues had devised over three decades ago. Long since retired, Bill patiently explained the nitty-gritty of the plan in lay-person’s terms, so I could include those details in my memoir.

He also told me about the Boyle Community Pediatrics Program at Dartmouth College’s Geisel School of Medicine. Operating for over twenty years, a unique curriculum component pairs medical students and pediatric residents with parents who have a child with a serious or chronic illness. The individuals visit the young patient in their home, meet other family members, and gain an understanding of the stressors these people experience in their day-to-day lives.

On the program’s website (https://www.chadkids.org/boyle) is the following comment: “The program was named for pediatrician William Boyle, who for 35 years has been a leader in both medical education at Dartmouth and in compassionate care for children and families.”

As Steve was fond of saying, “You got that right!”

Thank you again, Bill. Your life of service and determination to see your patients as people made such a difference for our family and so many others

“A true story of love, resilience, and struggle. The amazing journey of a loving mother who set out with no map, no examples, and little support determined to settle for nothing less than a full life for her son. Many times she had to “take the road less traveled” in her own life as well as Steve’s.”

And the last piece of the puzzle….