Cover Reveal – Heart of This Family 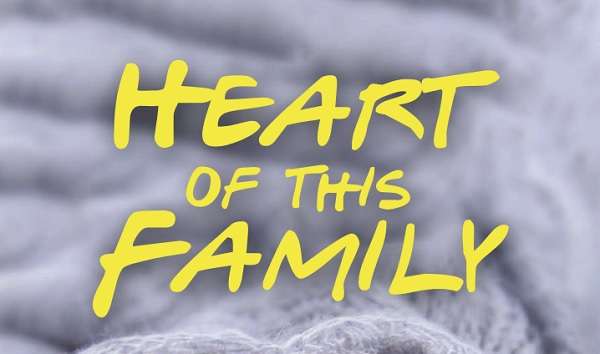 Writing my memoir wasn’t exactly easy so why did I think developing the “right” book cover would be any different? Given the title, the front had to include a heart. And I wanted to incorporate the colors blue and yellow, which the Down syndrome community uses to promote awareness. My publisher and I sorted through over a dozen potential images, but none spoke to me. Until…

In this photo, the blanket’s configuration resonated with me – symbolizing both love and protection. Both enduring emotions for a mother, and, for me, emotions which always intensified whenever Steve was involved. Also the image of those baby feet reminded me of a memorable incident early in Steve’s life – the result of my effort to enroll him in a nursery school for typical children in the town where we lived, Marshfield, Massachusetts.

Butterflies danced in my stomach as I mounted the steps on a late August morning. Barbara Keith greeted me and led me inside to a spacious classroom filled with natural light. I listened as Mrs. Keith, a fortyish woman with a warm smile and a pixie strawberry blond hair- cut, gave me an overview of the two-day-a-week pre-nursery program. She spoke with the unbridled enthusiasm of a woman who loved little ones and the opportunity to work with them.
“We see each child as an individual, following their own unique developmental path. At this age there is no ‘right’ time to learn something, so much depends on the child’s interest.” I nodded in agreement.
“So, what does a typical morning look like at Steeple School?” I asked. I wanted school to be fun for Steve. I didn’t want him in over his head.
“Children your son’s age learn through play. Most of our time is unstructured. We simply make a variety of activities available: art and music exploration, blocks, dress-up. Our outside time is geared toward large muscle development.”
Mrs. Keith continued. “As the year progresses, we do build in some structure. We want our children to learn to attend, to develop a span of attention appropriate to their age.” I nodded in agreement Of course, not all children learn the same skills at the same time,” she said. “We expect and value diversity.” She paused and looked at me. “So, tell me about your son. His name is Steve, right?”
I took a deep breath, nodded, gulped, and began. “Steve is my first born. He will turn three on September 27. His brother Michael is fourteen months younger.” I raced on. I needed to get Steve’s diagnosis out, before I lost my nerve. “But the thing about Steve is…ah…he has Down syndrome.”
For a moment whips of silence swirled around the room, broken only by the sound of birds chirping madly outside through the open windows.
“Oh,” replied Mrs. Keith. “I’ve never met anyone with Down syndrome before and I really don’t know much about children such as your son.” She hesitated, then leaned in and smiled. “Why don’t you tell me about Steve? What’s his personality like? What does he enjoy doing? What do you see as his strengths, his challenges? What are your hopes and dreams for him?”
I struggled to hold back the tears which filled my eyes. Folks seldom asked about Steve as just a kid. Usually comments included a qualifier or sympathy. Barbara Keith’s response relaxed me, and words tumbled out of my mouth like a rogue wave breaking offshore.
I told her Steve was amazing. He was determined, resilient, and never gave up on himself. “He is a happy kid, with a great sense of humor. He is kind to his brother…well, most of the time,” I said with a grin. I paused to take a breath. “He does have delays, especially in language development. He doesn’t have a lot of words right now, but he understands everything we say and can follow directions— especially when he knows his mom or dad means business.”
“Can you see him as part of a class here this fall?”
“Oh yes! I absolutely can! Steve would love it and I think for the most part he would fit right in. I really do.” Did I sound like I was begging? Please lady, just give him a chance.
Mrs. Keith had one more question. “How does Steve feel when you leave him with others? Does he show any anxiety or cry if he knows you aren’t going to be with him?”
I laughed. “Steve doesn’t care if I am with him or not. He has al- ways been like that. He will go with anyone.”
Mrs. Keith leaned back. “I think Steve sounds pretty typical of many of our children when they start out with us in pre-nursery. I’d love to have him join our class.”

With that statement Barbara Keith became an ardent member of Steve’s “village.” For two years Steve was successful student in her classroom. He had many friends and participated all activities – albeit in his own fashion!

Long before the terms “accommodation” and “inclusion” became part of special education parlance, Barbara Keith knew how to make things work for Steve. When he and his classmates were introduced to finger paints, he wanted nothing to do with the cool, squishy substance. This was the first sign of his tactile sensitivity, a common trait for children born with Down’s. On the day when the class lined up to make handprints for Mother’s Day, Steve adamantly refused to put his hand in the pool of white finger paint. Mrs. Keith wondered if he would be willing to make a footprint instead and helped him remove his shoes and socks. Without hesitation, Steve stepped in the white puddle and stomped his bare foot on the paper with a vengeance. Later Mrs. Keith told me once Steve finished, several of his classmates begged to make their footprints.

Throughout his life many individuals saw Steve and made assumptions based on his appearance – especially his facial features. But those, like Barbara Keith, who chose to see deeply, gained invaluable insight into what it means to be human.