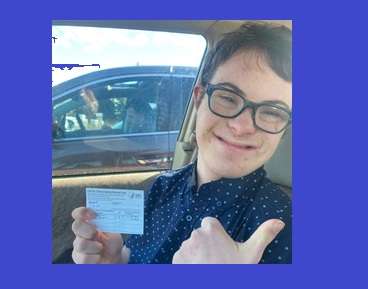 I’m tired. Tired of reading news about COVID. Tired of remembering to grab a mask, or two, every time I leave my home. Tired of political grandstanding. Tired of supporting friends who continue to struggle to find available vaccines – even though they meet the eligibility requirements.  But then, this happened…a few days ago my friend Cooper turned sixteen.

I baked my special gingersnap cookies. I went to the bank to get seventeen crisp one-dollar bills and tucked them into a card I made. Then I walked to his house…double-masked, of course. The sweet aroma of a wood-burning fire pulled me down the long driveway where Cooper’s dad, Chris, stood feeding the fire pit. Pretty soon, Cooper emerged from the front door accompanied by his mom, Gretchen. Once we established that all the adults had received both their shots, the masks came off and we hugged. We hugged!!! That felt so good!

Cooper was delighted with the cookies and reluctantly agreed to share them. He grinned when he saw the bills. “How many dollar bills do you think are there?” I asked.

“Sixteen,” Cooper replied, and began to count them. “Seventeen?” Cooper’s nose wrinkled as he frowned. “You got it wrong Linda. I’m sixteen today, not seventeen.” Then he listened intently as I explained the concept of one-to-grow-on. “Got it,” he smiled. “I like it!”

We chatted a while and when I announced I needed to get going Gretchen said, “I’ll walk you up the driveway.”

“No,” interjected Cooper. I will walk Linda up the driveway!” He offered his arm and off we went, Mom trailing behind.

Heart of This Family – Lessons In Down Syndrome and Love, was written with families like Cooper’s in mind. Actually, I wrote it for ALL families with young children. Today’s families represent the hopes and possibilities of the future. A self-described “party animal” Cooper was disappointed the pandemic prevented him from having a blow-out party. But his phone rang repeatedly with Facetime calls from his many friends. Cooper embodies inclusiveness. He has been in classrooms with his age-peers since preschool. He goes all over town on his bike, including loading it on the racks of Bellingham’s public transportation busses. He skis. He has acted in plays with the local children’s theater group. He played football in middle school and as a high school freshman signed up for ten sports! In this pandemic-altered schoolyear, he was in uniform (and masked) with the rest of the cheerleading squad as his school’s football team took the field for their first game of the season a couple of weeks ago – in late February! He has flourished academically, despite on-line schooling, and with the exception of math, is in regular education classes. In fact, the only real difference between Cooper and most of his friends is that the day after his birthday he received his first COVID shot – thanks to the expanded eligibility requirements recently announced by Washington State’s Governor Inslee.

As I made my way home, I once again reflected on the events of the past twelve months. A single bright spot for me was the publication of my memoir in August of 2020. But even more satisfying is the feedback I’ve received.

Cooper’s Dad, Chris wrote, “I LOVED the book, your writing style, your insights, etc.  I truly had difficulty putting it down and always found myself saying, “OK, just ONE more chapter.”

A retired public school educator said, “You have given all of us courage to cope with things in our lives with resolve and humor and to make things that seem impossible work.”

A mother commented, “Although I didn’t have a child with Down syndrome, your writing touched my heart. Your experiences while raising three sons mirrored mine in many ways. When mine were babies I remember getting up at night to see if they were still breathing because SIDS was something that doctors were starting to warn parents about. I rushed them to the doctors when they got sick. My fears and worries gradually abated over time, but never completely! Heck, I still feel concern when my sons are going through difficult times! We never stop being mothers.”

Now, as World Down Syndrome Day approaches on March 21, I’m happy to announce that Heart of This Family – Lessons in Down Syndrome and Love is available as an e-book. As with the paperback format all proceeds from sales will be directed to the Steve Cohen Fund at the Howard Center.

When signing my books, I always add the following, “Embrace Diversity.” That single thought makes my memoir an engaging and purposeful read for every reader. Diversity, in all forms, enriches us and is the value I hold closest in my heart. For as I wrote to Cooper in the card I gave him, “Every time I get to see you makes my day a little brighter.” And with spring on the horizon, aren’t we all looking for more light?

(This blog is posted with the permission of Cooper and his family.)