A Tribute to Gigi, Alyssa, and Payton 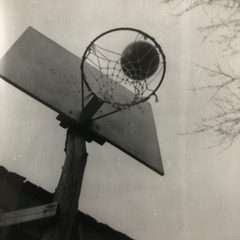 Over the past several days I’ve thought a lot about these three girls and the lives so suddenly cut short. The paths they were just beginning to travel. The individuals they were becoming. The game they loved to play.

When I was their age, my life revolved around sports, and although I didn’t realize it at the time, I was fortunate to attend a high school where three sports were available to girls: field hockey in the fall, basketball in the winter, and softball in the spring. I played them all but my first love was basketball.

For Christmas, 1953, I received a shiny new orange hoop to replace the bottomless bushel basket I’d hammered into a tree in our back yard. As the late March sun began loosening the blanket of snow which had covered our town for months, Dad and I began to assemble the basketball set-up of my dreams. I spent countless weekend hours helping to limb the branches then scrape and peel away the bark from the mostly-straight tree trunk we’d harvested from the woods behind our house. As Dad and I worked we shed layer upon layer until hats, mittens, and jackets littered the ground around us and we labored on in short-sleeved shirts in forty-degree weather. In our basement, I applied several coats of white paint to a three-by-five-foot piece of plywood purchased from the local hardware. Once the final coat dried I lined the drill bit up with the spots I’d carefully marked with a pencil and bored the holes for the support plate. Then I held the rim in place while Dad attached the nuts and bolts securing the hoop to the backboard. Finally, the day came when the frost had worked its way out of our dirt driveway. It was time to install the pole!

A friend’s father helped Dad dig a deep hole in front of the divider of our two-car garage. I watched while they set an industrial-sized can into the opening and back-filled the space around the can with loose rocks and sand. Then Dad and I held the pole while our helpful neighbor filled the can with freshly made cement. While the cement began to set Dad clambered up a rickety step ladder and attached two wooden braces from the pole to the garage. The following weekend I strung the pristine cotton net to the rim and did my best to steady the pair of step ladders while with the help of a ten-foot plumb line, the two men attached the heavy backboard to pole. Then I took the first shot. Swish!

By the time I entered high school in September 1954, I had a decent left-handed jump shot and could dribble with either hand. But the game we played in the mid-fifties would have been all but unrecognizable to Gigi, Alyssa, and Payton. We played “girls’ rules,” and our game looked something like this…

First, you decided if you wanted to play offense or defense. For me there was never a question, I loved shooting the ball. I would always play offense. But because of our “delicate nature,” girls’ basketball was essentially a half-court game. Each team fielded six players: three offensive players competed against the opposing team’s three defensive players and three defensive players against the other team’s offensive line-up. Neither group was allowed to cross the centerline. Dribbling was limited. You were allowed to bounce the ball just twice, then you had to pass to a teammate or, if you were an offensive player, take a shot. So much for my ball-handling skills! There was no jump ball to begin a game; teams alternated possession each quarter with the offensive side starting the play at center court. Any kind of contact resulted in a foul.

But regardless of how Gigi and her friends might have viewed our games, I shared one vital commonality with them – our parents’ involvement. Our league was comprised of eight teams, we played each team twice and while the boys’ games were played in the evening, our games were always held in the afternoons after classes ended. My mother, who cared little for sports and knew less, always was in the stands. But beginning my sophomore year when I played on the varsity team, Dad never missed a game. He worked in Boston, just over twenty-five miles north. Every game day he left work early and was in the stands next to Mom just as warmups ended. I never had to wonder if he’d make it. I knew I could count on him. Often times he was the only adult male in the crowd.

And so this week, as most of the news focused on Kobe, I’ve held three young teammates who were on the ill-fated helicopter close. I’ve reminisced about those long-ago seasons. I’ve remembered the close bonds forged with teammates., how we always had each other’s backs. I’ve recalled the excitement of winning a close game and the intense disappointment of a loss. I’ve chuckled as I recalled the bus rides to the away games and the silly jokes we shared. I’ve even summoned up the first few lines of our school fight-song – the one I thought I’d forgotten.  “There’s a school we all have learned to know / It’s the good old Marshfield High / Where the teams all show them how to go / And the students stand right by…”

Somewhere I hope Gigi, Alyssa, and Payton are finding their grooves, threading their passes, and hitting their fade-away jumpers. I hope they can sense how much their teammates miss them, but also feel secure knowing they will never be forgotten. Those they left behind will continue to play the game these three little girls loved so much. Their teammates will carry forth, play in high school, most likely in college and maybe even some will make it into the professional ranks. Girls and women “got game” now in ways I never imagined at age thirteen. Play on!