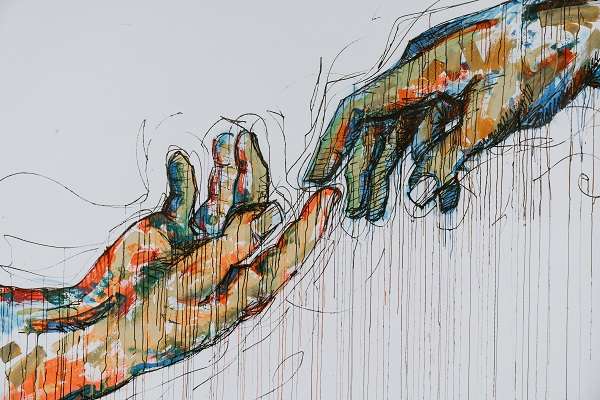 For years, I’ve kept my eyes and ears open for memoirs written by parents who have a child born with Down syndrome – books I yearned for during the 60s, 70s and even 80s when I was raising my son, Steve. Today I have close to fifty titles in my collection. AN UNCOMPLICTED LIFE – A Father’s Memoir of His Exceptional Daughter, by Paul Daugherty remains one of my all-time favorites. Daugherty’s mantra, “Expect, don’t accept,” guided both him and his wife as they raised Jillian. Steve’s younger brother, Mike, embraced this precept at an early age, as evidenced by the following excerpt.

One afternoon in early spring, Roger arrived home with Michael after picking him up at a Cub Scout meeting. Michael’s face was knotted with concern and worry.
“What’s up?” I asked. “Did something happen at Cub Scouts?”
Michael nodded. “Daddy said we’ll talk about it after dinner,” he whispered.
Later the three of us sat down in the living room. Michael nervously twisted the ends of his yellow Cub Scout scarf.
Roger began by saying when he’d picked up Michael, the den mother, Claire Dorfman, asked to speak with him. He looked at our boy. “She told me there was a problem today involving you and her son Patrick. Why don’t you tell us about it?”
Michael’s eyes began to fill and spill over. He struggled to speak. A trembling sigh escaped from his lips. I hated seeing his anguish. Then he steadied himself with a deep breath and said, “Patrick and I had a fight. All the kids were outside playing. I punched Patrick in the face and pushed him down. He started to cry and then his mother came out.”
“Yup, that’s pretty much what Mrs. Dorfman told me,” said Roger.
I looked at our son in disbelief. I’d never known him to be violent. Sure, there was the usual pushing and shoving between brothers, but I’d never seen Michael lose his self-control and throw a punch. Ever. What could have possibly provoked him?
“Start at the beginning and tell us what happened,” continued Roger. “Why did you hit Patrick and push him down? Do you know why you became so angry?”
“P-P-Patrick s-s-said something mean,” Michael sputtered, tears streaking down his face. “H-he c-called Steve a name.”
My stomach clenched. I’d continued to worry about Steve’s segregation from his age peers; it remained one of my biggest stressors. I knew when people who are different are pushed to the side and not seen, diversity has no value. Fear foments.
“What did Patrick say?” asked Roger gently.
“He called Steve a stupid dummy because I told him Steve liked Batman better than Superman. He said Steve was a retard. I don’t know what retard means, but I know it isn’t nice.”
Shit! For a second I stopped breathing. My heart shattered. I ached for Michael, for Steve, for our family. I couldn’t speak through the lump in my throat.
Our son went on to explain that initially he’d ignored Patrick’s comment. But when the taunting continued and Patrick ran through his backyard yelling, “Mike’s brother is a dummy-retard,” he’d snapped. Claire Dorfman found her son on the ground crying with Michael standing over him. When she asked what had happened Patrick told her Michael had started things by calling him names.
“Patrick’s mommy got really mad at me and said I was a bad boy. I’m sorry, Mommy and Daddy.” Tears puddled down Michael’s face and he rubbed at his eyes. “But I didn’t call Patrick any names. He called Steve names and I didn’t like that.”
Roger’s eyes flashed. “Michael, you shouldn’t have hit Patrick and pushed him down, but…” He hesitated before continuing. “But I probably would have done the same thing.”

Steve’s youngest brother, Josh, was seventeen when he challenged me to “Expect, not accept.” His concern led me and his father to hold a combination graduation and 21st birthday party for Steve. This excerpt is from the chapter “Graduation Day, 1987.”

Josh planted the idea in my head one night as he and I sat down to dinner, just before the start of his senior year at Hanover High School. “I can’t believe it,” I’d commented. “My baby—a senior!”
Josh grinned. He was a compact wiry bundle of energy, his curly brown hair cropped close. “Well, I can! Seems like I’ve been waiting for the right to use the senior lounge forever.” As Josh reveled in the thought of this privilege, his faced clouded. “But…”
“But what?”
“I kinda feel bad for Steve. Because he’s left school and is working at the co-op, he’s going to miss graduating. That’s not fair. The plan was we were both going to graduate high school the same year.”
My heart melted. I reached across the table and placed my hand on Josh’s tanned arm.
“You’re always thinking about Steve, aren’t you?”

Thank you Paul Daughtery for your kind endorsement of HEART OF THIS FAMILY.

“Part love story, part life story, all heart, Linda Morrow’s moving chronicle of her son Steve’s remarkable 49 years has something to say to us all. Don’t settle. Hold tight to those who matter to us most. Love, in all its sad and glorious forms, is the worthiest of allies. Linda learned these truths completely, with her son’s help. In Steve’s unbreakable spirit, Linda Morrow found her own. That was Steve’s gift to her. One of many.”

Paul Daughtery Author of An Uncomplicated Life: A Father’s Memoir of his Exceptional Daughter

Curious about the cover? Here’s piece 3 of the puzzle…