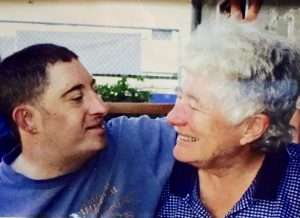 Steve, my first born child, was born in 1966. I was twenty-six. Although, doctors knew from the get-go, that my baby had Down syndrome, I wasn’t told, until he was twelve weeks old. These learned men (and they were all men) didn’t think I’d “be strong enough so soon after giving birth to handle this news.” HA. They didn’t know a thing about me! The second mistake my pediatrician made (after his decision to withhold his diagnosis) was to tell me that, “your baby is a little Mongoloid.”

In 1966, I don’t think I’d ever seen an individual with Down syndrome. At that time, many were sentenced to miserable lives in institutions, or kept hidden at home. No one told me about the National Association for Down Syndrome, founded in Chicago in 1960 by Kay McGee, shortly after the birth of her daughter Tricia. Twelve years later (1972) the National Down Syndrome Congress was formed, followed by the National Down Syndrome Society in 1979. Long before the days of computers and the Internet, I didn’t know about any of these resources.

No access to resources, also meant no official services such as: early intervention, occupational therapy, physical therapy, speech therapy. And medical intervention to correct Steve’s congenital heart defect? Not yet developed. Nevertheless, I PERSISTED. Support came from my parents, Steve’s Dad, his two younger brothers, friends and neighbors. In 1971, just before Steve turned five, I met my first parent of a child with Down syndrome, and her son, six months older than Steve. More than forty-five years later, she and I remain close friends.

For the past four years, I’ve been writing a memoir about the experiences I had and the challenges I faced during the first twenty-one years of Steve’s life. Finally, I can see the light at the end of the tunnel. My goal is to have my writing ready for publication (in some form) by sometime in 2018. Thus, the birth of this website. Folks tell me I need to establish a “platform.”

So What About The Title of This Blog?

Whenever Steve faced a new or uncomfortable situation, he often said, “I small nervous.” As in, “I small nervous about my birthday. I never been (age) before.” And, I am small nervous about beginning this endeavor. As in; What will I say? Will anyone visit my website and read my blogs? Will I be able to keep up with the technology? (After all, I am well into my seventies, didn’t even have a TV until I was ten. I saw my first computer at twenty-one when this remarkable device took up an entire room!)

Steve left us, suddenly and unexpectedly, in November, 2015. But he had great life. He was in no way a Down syndrome super star. Just a guy, who was the proud owner of his condo, and loved his job stocking shelves in a grocery store. I think about him every day. And I think about adults like Steve, especially those young adults, over twenty-one, who have aged out of the public school system – an event often referred to by their parents as, “falling off the cliff.” Will they find a way to live independently? Will they have opportunities for competitive employment? Will they enjoy an active social life? Will they apply and be accepted to institutions of higher learning? Will they find love and marry? How will they fare under the current administration in Washington, DC?

So much has changed since 1966. So many battles have been won. So many still need to be fought. I’m encouraged when I read authors like: Paul Daugherty, An Uncomplicated Life; Michael Berube, Life As We Know It and Life As Jamie Knows It; George Estreich, The Shape of the Eye; Sandra McElwee, Who’s The Slow Learner: A Chronicle of Inclusion and Exclusion; Greg Palmer; Adventures in the Mainstream; and Romy Wyllie; Loving Andrew. My heart fills when I learn about organizations such as Ruby’s Rainbow http://www.rubysrainbow.org and their 3/21 Pledge which helps raise scholarship monies for individuals with Down Syndrome who wish to attend college. I smile when I recall meeting Dylan Kuehl. Not only is Dylan a recipient of a Ruby’s Rainbow scholarship, he is also a multi-talented artist. You can see his work on http://www.oly-wa.us/DKarts.  Finally, a huge shout-out for my favorite bagger at the local grocery store here in Bellingham, Beth Anna Margolis. Not only is Beth Anna a talented artist, she is also a published author! Her book, Uplifted Down Syndrome is a delight.

Please join me, because together our influence strengthens. I want to work with you to promote continued advancement for adults, not only with Down syndrome, but for all adults with developmental disabilities. I look forward to hearing from you.