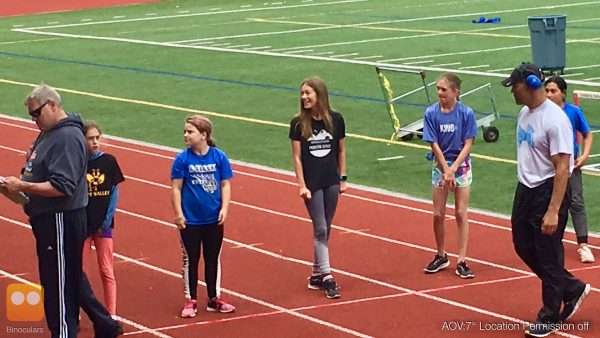 Last Friday I went to the 5th grade All-City track meet to watch my granddaughter participate with her classmates from Parkview Elementary. During the day I witnessed lots of examples of grit, determination, courage and kindness. But what I will always remember was watching a group of six 5th graders from Wade King participate in the 50-meter dash. Are you wondering why these students stood out for me? Let me tell you a story.

Once upon a time, over FIFTY years ago, a little boy was born, He was his mother and father’s first child and they loved him at first sight. They named him Steve

When he turned three Steve went to Nursery School. You might call it Pre-School. There he made new friends, took part in circle time, and learned to share and wait his turn. On the last day of his second year at Nursery School, his teacher picked Steve to hold the flag while he and his classmates said the Pledge of Allegiance – which sounded a bit weird because three and four-year-olds often don’t pronounce some of the words in the Pledge correctly!

By the time Steve turned five, he had two younger brothers – Mike and Josh. His family also moved to a new town. One of the first things his mother did was register Steve and his middle brother Mike for elementary school. Steve was old enough for Kindergarten and Mike was almost four and old enough for Pre-Kindergarten. But something unexpected happened.

Steve’s Mom was told while Mike could go to Pre-Kindergarten, Steve couldn’t go to Kindergarten. “Steve is different from other kids,” said the principal. “He has to go to a different school, a special school for kids like him.”

Steve’s Mom agreed he was special. She thought all her children were special! But she didn’t think Steve was different. Sure he was shorter than most five-year-olds, and sometimes it was hard to understand Steve. But Steve was also funny, and good at making friends. His favorite superhero was Bat Man, he liked watching Saturday morning cartoons and he still loved ice cream – LOTS!

One year Steve’s class was put in a school really far away. He rode the short yellow bus for almost an hour in the morning and then another hour in the afternoon. No wonder he got tired! The principal at this school also roped off a piece of the playground at recess. Steve and his classmates had to play on one side of the rope. All the other children at this school were told to stay away from “our special guests.” They were told to play on the other side of the rope.

Six years went by. Steve was now eleven and the family moved again, Now the United States had a new law stating Steve HAD to be allowed to go to school in the town where he lived. And he did. But he’d never been taught to read, or do math. So he was put in a first grade classroom…an eleven-year-old boy in a classroom with six-year-olds! Steve didn’t seem to mind. He was still very short so he kind of fit in. His teacher in this school knew Steve could learn just like the other kids. Sometimes it just took him longer.

By now maybe you’ve figured out this is a true story and Steve is my son. And yes, Steve was born with Down syndrome. Steve became an adult. When he was twenty-one he got his first job, working in a grocery store. When he was twenty-two he moved away from home – just like his brothers. Eventually he lived in his own home. He was really proud to be a home owner.

So back to the track meet. When I saw a row of kids wearing purple shirts line up together at the start line for the fifty-meter-dash, I wondered: “What the heck? Why does this race have just Wade King kids in it? The other races had kids from all different schools.”

Then the gun went off. I saw one girl – shorter than her classmates start running. Alongside her jogged a girl who ran at the same pace. I also watched a boy make his way slowly down the track. Three classmates stayed right with him – all the way to the finish line. “Oh,” I said, “now I get it!”

This was a UNIFIED TEAM! A group of Wade King 5th graders who, instead of running to beat each other, ran to support each other. This was what my son Steve never had when he was an elementary school student. I smiled and cheered. I was so proud of you and your school.

In a few more days your time at Wade King will be over and you will all move onto Middle School. I hope you will always remember the 5th grade track meet. Because on that day, Wade King 5th graders taught a crowd of over 1,000 kids, parents and grandparents some very important lessons: everyone is special; everyone has challenges; everyone is gifted in some way.