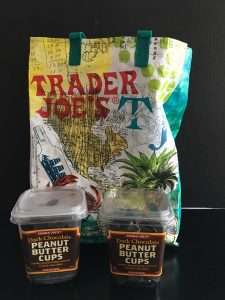 I seldom shop at the Bellingham Trader Joe’s. Not that I don’t like the products, but the store is always crowded, and the parking lot is way too small. I always feel I am doomed to play bumper cars there one day. But today we were out of mini peanut-butter cups and those dark chocolate morsels from TJ’s were calling my name.

Your back was to me when I walked down the aisle in search of my treasure, but before we met I knew you. You see, there was no mistaking your short stature or the shape of your body. My radar for your tribe is always on high alert. And there you stood on your folding two-step ladder, holding the safety bar with one hand and meticulously stocking the top shelf with the other. You remained completely focused on your task, oblivious to the mob of customers swirling around you. I don’t know if the other shoppers even noticed you, but I did. I watched for a few seconds and when you got down to move the ladder over a few paces, I went up to you.

“I don’t think it’s fair that these shelves are built so high,” I said.

Your speech was clear and you smiled at me as you spoke. You wore your blond hair pulled back in a pony tail and your blue eyes sparkled with intelligence and delight. I looked at your name tag: MARY.

“You’re doing a great job though,” I responded. Then I moved on. I didn’t want to distract you anymore than I already had.

At the end of the aisle stood two of your colleagues stocking the freezer bin with ice cream. I approached them “Excuse me. How long has Mary been working here at Trader Joe’s?”

Your co-workers stared at me and hesitated for a moment. They seemed puzzled by my question. I pointed in your direction. Their faces broke into huge grins.

“About five months,” replied one.

“She’s awesome,” answered the other.

“I’m asking, because Mary makes me think of my son Steve,” I explained. “He too was born with Down syndrome, a long time ago, in 1966. I pulled out my phone. “May I show you a photo of Steve?”

The two guys nodded and I scrolled up to the photo I’d received just a few days ago; the one hanging above the aisle in the store where Steve worked for over seventeen years.

“Where is this store?” asked the other.

I explained that the Healthy Living Food Market and Cafe was an independently owned and operated store in South Burlington, Vermont. I added that the owner and founder had hired Steve just a couple of years after her market opened.

“At first the store was very small, but it grew and grew, and Steve grew with it. When Steve died two years ago he was the longest tenured employee at Healthy Living.”

Their faces clouded and both expressed sorrow for his passing. “So that’s Steve in the sign?”

“Yup. When I asked the owner if she’d consider hanging a sign to mark the aisle where Steve stocked the shelves, she thought that was a great idea. However, it took a while to bring the sign to life. It just went up last week. I haven’t seen it in person yet, but several of Steve’s friends have.”

I explained that I had suggested creating a marker. But not to memorialize my son. Rather I hoped shoppers at Healthy Living would know the folks like Steve are capable of holding a job in the competitive employment field.

“Steve was a productive worker. His job meant the world to him. I think people learned as much from him as he did from them.”

A brief pause followed. Then one of your colleagues spoke. His voice was soft, almost reverent. “Mary is a light. She brings so much energy to Trader Joe’s.”

I nodded. Your co-worker could not have known that after Steve’s death, so many people remembered him with the same exact words. “Steve was a light,” they said. “He was a teacher.”

The tide of shoppers ebbed and flowed around the three of us and I knew I needed to move on. “Thanks for listening. Could you please let the powers-that-be know about our conversation today? Would you let them know how important it was to one of your customers to see Mary employed here?”

Both men assured me they would pass on my message.

As I headed to the checkout counter, I turned around hoping to gain one last glimpse of you. But you were no longer on your ladder, stocking that aisle. No matter. I could still feel the glow of your light.

The next time I am at Trader Joe’s I will look for you, Mary. If you are there I will introduce myself and tell you once again what great job you are doing. If you are not too busy, maybe I will show you a photo of Steve.

Mary, I know that my son’s legacy lives on in you. His determination, and grace showed the world that individuals born with Down syndrome are just people. They can make meaningful contributions to their communities in many ways. You may not realize this, but you carry Steve’s message with you every day you punch your time card and report for duty. You are a teacher and your light shines brightly.