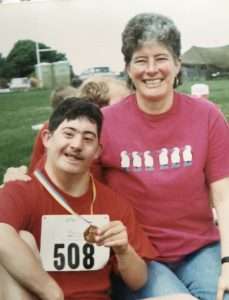 Over the years I’ve been inspired to write some of my musings as poetry. I don’t see myself as a poet and seldom set out with the intention of writing a poem. These poems just seem to happen – in the shower, as I’m lying in bed waiting to fall asleep, skiing, hiking, kayaking or canoeing. This one emerged on a cold November morning in 1984 as I was running my “regular” loop in Hanover, NH.

One thing I’ve never wondered about
Is why he is.
For he has already made his contributions to this world on a way that most of us have yet to do.
And I know that long after he is gone
He will be remembered by those he touched.
And all of us will have been enriched for having known him’
And thank God – whatever and wherever she is
For having set him among us.
For in this imperfect world
Perfection wears many guises.

When I read this now, so many years later, I am struck by how much of what I wrote then, still resonates with me today. I couldn’t have known then that Steve would continue to vote in local, state, and national elections for more than thirty years. I couldn’t have known that he would participate in Special Olympics. I couldn’t have known that he would appear as a Munchkin in the Burlington’s Community Theater’s production of The Wizard of Oz. But I do know Steve continued to produce amazing art even thought a stroke in 2004 forced him to switch from his dominant right hand to his left. I do know his family and friends continue to remember and often quote his humorous and original “Steve-isms.” I do know that Steve is remembered first and foremost as a teacher by all who knew him.  And most importantly I still have never wondered why Steve came into my life. I am just so grateful that he did.