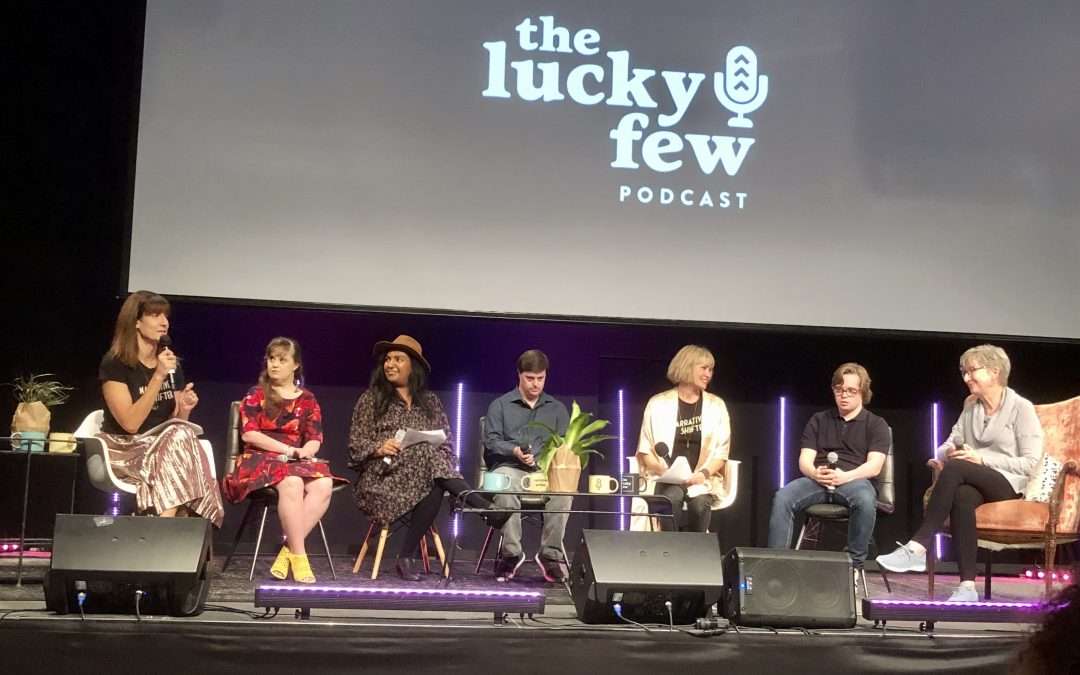 As soon as we got into our rental car, headed out of the airport and onto the traffic-clogged freeway, I knew this country girl was out of her element. “We’re not in Kansas anymore,” I said to my wife Sue as she gripped the steering wheel while I focused on the Google Map on the dashboard screen. We’d traveled to Los Angeles to do “research” for my memoir, about raising my son Steve who was born with Down syndrome in 1966. Although essentially complete, I wanted to take advantage of an opportunity to meet some folks, promote When Down Means Up – Lessons In Down Syndrome and Love, and hopefully score some endorsements before the publication of my book by She Writes Press in October of 2020.

We made it to our motel room without incident and the next day headed out to meet with Gail Williamson, a talent agent for Kazarian/Measures/Ruskin and Associates (KMR). Gail leads KMR’s Diversity Division and seeks out roles for actors with disabilities. While I was interested in Gail’s work in an industry I know nothing about, I also wanted to learn about her journey as a mother of a son with Down syndrome. Gail’s son Blair was born in 1979, thirteen years after Steve’s birth and it was his early interest in acting that drew Gail into the business. Blair has appeared in commercials, films, and TV shows. His life is rich and when not working on a set he attends an active Day Program along with the woman he’s dated for more than a decade.  Gail spoke enthusiastically about her life in the LA area, especially her Saturday morning breakfast group – a supportive network of mothers and their children with disabilities who have been gathering at the same restaurant for years. She described the variety of resources available but also admitted that her son’s independence is limited by the city environment. Blair is usually transported from place to place by one of his parents. He also lives at home rather than in his own apartment for reasons of safety.

The following evening Sue and I attended an episode of The Lucky Few Podcast, co-hosted by Heather Avis, Micha Boyett and Mercedes Lara – all mothers of young children with Down syndrome (click the link below to hear the replay). Launched on March 21, 2018, The Lucky Few Podcast strives to “shift the narrative by shouting the worth of people with Down syndrome.” While most of the fifty episodes aired so far are voice-only and recorded in a studio, the November 21st edition was a live event held in Monrovia, CA on the topic: “How the entertainment industry is shifting the Down syndrome narrative.”  The three hostesses interviewed Gail Williamson and three of the individuals she represents: actress Jamie Brewer, and actors Jared Kozak and Cole Sibus; Jamie and Jared are in their thirties, while Cole is twenty-one. Sue and I had met Jamie before when we traveled to NYC in April 2018 to see her on stage in Amy and the Orphans.

Since returning to Bellingham I’ve been sorting through a jumble of emotions. Watching the interview, I felt that Jamie, Jared, and Cole were so sophisticated and advanced compared to Steve. But there were times when their vulnerability and innocence were evident and occasionally Gail needed to rephrase a question posed by one of the hostesses before her clients could answer it.

After the show, Sue asked Gail if it was hard for her son to sit in the audience watching his friends take center-stage. She replied yes, but explained they had discussed what the evening would entail prior to arriving and that especially Jared and Cole were new and upcoming actors and tonight was their time to shine. However, you can see Blair, along with Jamie on YouTube in Whitney’s Wedding a short piece they did for the 2017 Easter Seals Disability Film Challenge (see video below) and both Blair and Jamie appear in the soon-to-be-released movie Turnover.

Throughout the podcast, I kept thinking about Steve and how much he would have loved being at the event. He would have thrilled at meeting “real” actresses and actors who looked like him. He loved theater and movies and always wanted to “go to Hollywood and see movie stars.”

During the informal time at the conclusion of the podcast, I watched with envy the interactions between Blair, Jamie, Jared, and Cole. Steve never really had a peer group which included other individuals with disabilities. I also envied the crowd of Moms who had each other for support. Steve was six before I met another mother of a kid with Down syndrome, and during his adult life, my connections with mothers of adults with Downs remained very limited. I laughed along with Jared’s and Cole’s mothers as we agreed all our sons’ viewed their birthdays as national holidays. Our guys all barely finished celebrating their current birthday before they began planning for the next one!

I’ve also been questioning myself. Why was it so important to me that Steve not live with me as an adult? Blair, Jamie, Jared, and Cole all live at home with their parents – in Jamie’s case her grandmother, whom I met, is part of her extended family as well. And I wondered…how long will these living arrangements be possible. One Mom wanted to know how Steve had died. I told her his passing and been sudden and unexpected, and admitted I’d felt a sense of relief as well as profound grief. She understood completely and said she hoped her child, “goes before I do.” Left unsaid was the question: What will happen to my son or daughter when I can no longer care for them? And given the early aging so evident in adults with Down syndrome as they approach middle-age, the specter of Alzheimer’s has to lurk in their minds.

And finally, I think about the identity to which I still cling. Steve has been gone for over four years and yet I am still the mother-of-a-son with Down syndrome. I still feel so connected to this club. I don’t think that will change. Ever.