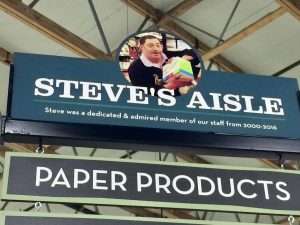 In 1988, Steve entered the competitive workforce as a 19-year-old when he was hired by the Hanover New Hampshire Food Coop. He became the first person with developmental disabilities to work for the Coop and thus began a lifelong career in the food industry as a shelf stocker. Over the years he worked in grocery stores in Hanover and Burlington, Vermont. But unquestionably the highlight of his work life became the 16 years he spent as an employee of the Healthy Living Food Market and Cafe in South Burlington, Vermont.

Founded in 1986 by Katy Lesser, the market was still in its initial location when Steve began work there in the summer of 2000. He was trained and supported by a job coach provided the Howard Center the agency which oversaw all aspects of Steve’s life in Burlington. Eventually Steve worked on his own under the direction of one of the staff members. He worked part-time, three days a week, got a ride to work from his community access worker and then took public transportation back to his house.

Then in 2004 Steve’s landscape shifted in a major way- the result of a stroke. After a week in the hospital, Steve moved to a rehabilitation center for an additional two weeks to work on regaining the use of his right arm and hand. Katy was one of his many visitors. She brought him treats from the store and a card signed by many of Steve’s co-workers. Before she left she turned to me and said, “I just want you to know that when Steve is ready, we want him back in the store, in whatever capacity works for him.”

Steve’s recovery took several months and during that time Healthy Living moved into a new building designed by Katy and her  adult children, Eli and Nina. Katy remained true to her word and once Steve was ready to return, she worked with the job development folks at Howard to tailor a position to meet Steve’s needs.  The footprint of the new store added four times more square footage and Katy felt Steve needed a job coach working beside him. Initially I mourned this loss in Steve’s level of independence, but once I laid eyes on the expansive aisles and the shear size of what Katy had birthed, I completely agreed with her decision.

Even as Steve continued to regain strength and become accustomed to his new dominate hand, the scope of his duties at Healthy Living narrowed. Certain things he’d been able to do before the stroke were no longer possible. Some products were simply too heavy or cumbersome for him to stock. Morning hours were shifted to afternoons to accommodate his need for additional sleep. Over time, the length of each work day shortened.

No matter. As soon as Steve reported for work he headed for his locker, donned his official black apron with the store’s logo and straightened his wooden name tag which read: Great Service By The Mayor. Steve insisted on this nickname when he began working at his initial workplace and the moniker followed him wherever he was employed.

What was the worth of Steve’s employment at Healthy Living? If measured in terms of rate of production, probably not much. He stocked the shelves on his assigned aisle with slow precision. But as Katy often commented to me, “Whenever I am having a difficult day, if I know Steve is on the floor, I go seek him out. I always get a cheery greeting and a hug. Steve reminds me to slow down and think about what is really important.” That kind of presence has no dollar value.

Steve was scheduled to work that Friday in November, 2015, when his heart stopped pumping. Recently Healthy Living hoisted a sign, pictured above, to mark the section of the store where Steve labored for so many years. I met with Katy several times to discuss possible designs for this tribute, but Katy, Eli and Nina saw the work through to its conclusion. I recognize that over the years fewer and fewer shoppers will remember or know the “mayor” of Healthy Living , but that is not the point. My hope is that every time a busy customer walks down the aisle and happens to look up and notice the sign, that person will reflect for just a moment on several truths. Collectively it is our differences that make us stronger. Every individual has a unique contribution to make to his/her community. When business owners like the Lesser family see workplaces as  arenas for inclusive employment, everyone wins.

When I travel across the country sometime this spring to visit friends in Vermont, I will see Steve’s tribute in person for the first time. I will walk down “his” aisle and run my fingers gently along shelves.  I will leave a note or totem of some sort to my son tucked away among the products. I will smile as I remember the pure joy he experienced each time he received his paycheck. And I will always be grateful to Katy, Eli and Nina for giving Steve a chance to contribute in his own way to the well-being of his community.