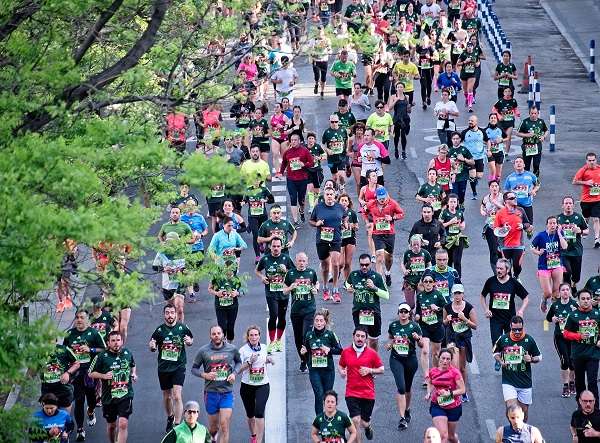 After Steve’s death in November 2015, I worked my way through the grief of losing my son. But I also thought about how I wanted to honor his life. I’d been a recreational runner for close to thirty years. Running got me out into nature. Running relieved my stress. Running was both meditative and a generator of ideas. One drizzling mid-winter morning in Bellingham, Washington, I headed out on a trail close to my home which follows the shoreline of Bellingham Bay. As I ran, I recalled the times Steve and I had watched friends compete in the Vermont City Marathon held annually on the Sunday of Memorial Day Weekend in Burlington. Relay teams, as well as solo racers, participated. At the conclusion of my route, as I stretched out, I reached a decision—I would form a five-person team to enter the 2016 race.

I contacted a friend who’d run the 26.2 mile course several times. An accomplished racer, Sue Dodge was also the mother of two pre-teen girls. Her older daughter was born with Down syndrome. She enthusiastically agreed to be be part of my team and recruited three other members. I claimed the shortest section—the 3.1-mile starting leg. Then I got busy. I sent out a series of emails to friends about Steve and his life, asking for pledges to raise money for the Howard Center—the Burlington agency which had supported Steve for so many years. I ordered team shirts in hot pink (Steve’s favorite color) with the Howard logo on the front and our team name Run 4 Steve on the back. And throughout the rest of Bellingham’s typical gloomy, gray winter and cool spring, I began timing my runs. I wanted to increase my “speed” to what I considered a reasonable pace for my seventy-five-year-old self: eleven minutes-per-mile.

But no amount of training could have prepared me or the 8,000 other runners for the weather which greeted us the morning of May 29, 2016. As I made my way to staging area for the 8 a.m. start, word was already out. In anticipation of a blistering hot and humid day, officials had announced the following: if factors combined to reach the extreme level of the established Emergency Alert System, the race would be called. Competitors with a similar anticipated pace were grouped together and by the time I found my pack of eleven-minute-milers, I was so far from the elite runners that I didn’t hear the gun go off signaling the marathon’s start. But eventually the crowd in front of me began to move – first a slow walk, then a plodding jog. “Here’s to you Steve,” I whispered, as I stepped forward.

Close to an hour later, I staggered into the first transfer point. It was nearly empty. Glassy-eyed, I handed off the timing chip to my friend. She pushed me in the direction of a front porch where spectators waited with an ice-cooled towel to drape around my neck. Then she took off, casting a worried glance over her shoulder.

At 11:58 a.m., close to four hours after the race began, officials closed the course, sent buses to pick up those who had yet to finish and issued a statement. Conditions had reached a dangerous level. For the first time in 28 years, the race was discontinued due to heat.

Several days later, my wife, Sue Ming, and I met with Howard staffers at the Developmental Services office to discuss the best use of the close to $8,000 raised in pledges. We decided to focus on helping Howard clients who wanted to enter the competitive work force. In early summer, Steve’s condo sold and profits from the sale were added to our initial donation.

In the summer of 2017, my wife and I again made our way to Burlington to announce the establishment the Steve Cohen Fund during a celebration marking the 35th anniversary of Howard’s Project Hire. The overall goal: “to support clients served by the Project Hire program in ways which will enhance their efforts to seek and hold mainstream employment positions.” Over the years, monies have helped individuals purchase clothes needed for their jobs; provided tuition for a student to complete a food service program at a local technology center; and bought specialized tools for workers with visual impairments. In fiscal year 2019, the fund covered the stipend of an AmeriCorps VISTA member hired to support various endeavors at Project Hire.

When I began writing my memoir, I determined that, once I found a publisher, all proceeds from book sales would be donated to the Steve Cohen Fund. Thanks to Lisa Dailey of Sidekick Press for your belief in me. Gratitude to each individual who purchases HEART OF THIS FAMILY – Lessons in Down Syndrome and Love. And deep gratefulness to everyone associated with the Howard Center for all you did for Steve and for his family.

All proceeds from the sale of Heart of This Family will be directed to the Steve Cohen Fund administered by the Howard Center in Burlington, Vermont. While I have included several ordering options below, for a limited time only, I would encourage you to order directly from me. This maximizes the amount of money possible to support the fund we established in Steve’s name. A $20.00 payment gains you a signed and personalized copy of my memoir and includes mailing (if necessary). Please use the PayPal link on the home page for this option. Thank you!