WORLD DOWN SYNDROME DAY and A WRINKLE IN TIME ??!? 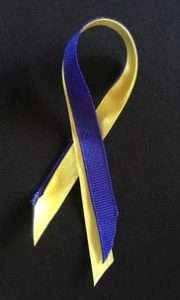 So, I have this blog, and I need to come up with topics…But World Down Syndrome Day (WDSD) and Wrinkle In Time? Really? Honestly, I didn’t start out with this combination – just stay with me.

I began with the intent of writing about WDSD. Normally I don’t “do” Days – I mean there is one for just about every day of the year, right? But I figured I could come up with something about WDSD, so I began by looking at its origin.

The Day was observed for the first time in 2006 when the Down Syndrome Association of Singapore created and launched a website so that activities throughout the world could be recorded in a single location. Beginning in 2012 the United Nations General Assembly designated March 21 as the official WDSD. The significance of this date is immediately obvious to those actively involved with Down syndrome, with the 21st day of the third month representing the extra or third chromosome on the 21st chromosomal pairing. Check out the World Down Syndrome Day website for more information.

I think I first heard the term Down syndrome in college as part of my Psychology 101 course when we covered a unit on Intelligence Quotient (IQ). My textbook explained that any child with an IQ score between 70 and 135 was considered “normal.” Anything above 135 meant you were “gifted.” In high school I was a member of the National Honor Society so I figured I was on the upper range of “normal.”

But what about those scores below 70? What did that mean? I dutifully memorized the three categories of mental retardation:

And at some point during a discussion our professor told us about a group of people born with mental retardation and called “mongoloid idiots.” He then added that the more appropriate term was Down syndrome.

Five years later, in 1966, those memories came rushing back eight weeks after I gave birth to my first child, a son.  At his first “well-baby checkup,” Steve’s pediatrician stunned me by stating, “Your baby is a little Mongoloid.” He hurriedly corrected himself by adding, “These days some people use the term Down syndrome. I knew your son had this condition during my initial examination in the hospital. But I didn’t tell you until now because I felt you’d be too weak to handle the information right after giving birth.” How little he knew or understood.

Over the next three and a half years two more babies followed – both boys – and I raised all three together, simply doing what my gut told me to do. At that time there were no early intervention services or parent support groups. I didn’t meet another child with Down syndrome until Steve was five years old.

The theme for WDSD 2018 asks us to consider what individuals with Down syndrome contribute to their community. So I reached out to those who came to know Steve and asked them their thoughts. Below are some of their responses. 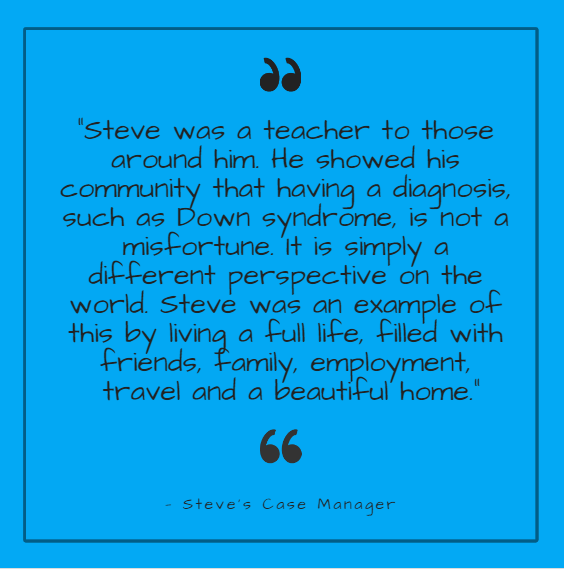 From the owner of the store where Steve worked – “For 16 years, Steve was a big part of the community team at Healthy Living Market and Cafe.  We have almost 200 people on staff here, and over the years we’ve had some turnover, so Steve’s presence on staff had a big effect on hundreds and hundreds of people.  How did Steve contribute to our community?  In so, so many ways. Not only was he an efficient, busy stocker in “his aisle,” he was also part of the emotional culture of our company.  The joy, excitement, humor, and courage Steve brought to work every day, became a big part of how we operate. Being good to each other, sharing the load, supporting and caring…these are foundational elements of our culture, and much of it I learned from Steve.  Because no matter how busy or cranky I was, Steve would insist on a hug…and I was reminded each time that what is most important is how we treat each other, how we listen, how we care.  That is Steve’s legacy!”

From one of my friends who completely “got” Steve – “Steve was the distributor of joy to all he came in contact with. He helped people sort out the important things in life and to cling to them: laughing, drawing, cheese cake, fuzzy slippers, the cow waiting over the moon for him. He was the softest spirit I know, just enjoying life, family, work with no malice at all. My idol. That glitter in his eyes when meeting big breasted women. To his community he showed us a sense of humor, acceptance, and above all a love of life.”

But everything came together a few days ago when my childhood friend and I went to see the recently released film “A Wrinkle In Time.” We laughed at ourselves as we both carried assistive hearing devices into the theater. Thank goodness for technology! Even with our hearing aids we needed to use these amazing wonders to read the closed captions on the tiny screen, so as not to miss any of the dialogue. Of course we’d both read L’ Engle’s book soon after it was published in 1962, and as pubic school educators suggested the title to the students in our respective classrooms. Eventually we reread the novel with our own children and we both enjoyed seeing the story come to life on the screen. 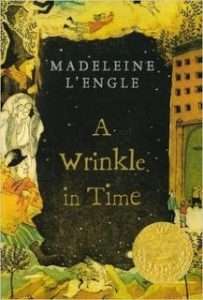 During the film a strong connection between Steve and several of the characters overwhelmed me and I gained a new appreciation for many of the themes covered in both the book and the movie. Steve, like Mrs. Who, often struggled to put his thoughts into words. Sometimes he’d use a quote like, “What am I, chopped liver?” when he felt left out or ignored. He was a skilled mime as well. If all else failed, a hug or his head on your shoulder conveyed a sentiment.

And Steve certainly stood out as different from his peers, much like Meg. In a world where often too much value is placed on conformity, Steve showed us the power of multiformity. He was a constant reminder that uniformity, like that  experienced on the planet of Camazotz with its rows of identical houses and identical human beings, doesn’t enrich our lives very much. We learn and grow through diversity.

But Steve’s presence was strongest for me when Meg used her gift of unqualified love to fight off the powers of the IT and bring light to a world of darkness. After his death in 2015,  many people commented that for them  Steve had been “a light.” During his lifetime, some may have perceived my son through the lens of what they saw as his limitations. But as evidenced in the quotes above, those who knew Steve well understood his uniqueness and his boundless love as his gift.

The ribbon colors blue and yellow are used throughout the world to represent Down syndrome awareness. Together the colors signify perseverance, dependability and optimism. On March 21st I will be in Vermont skiing the trails of my “home” hill, Burke Mountain. On my parka I will wear the ribbon in the above photo to celebrate both World Down Syndrome Day, Steve’s contributions to his community and the contributions of others all over the world. And I will remember the power of love. Our world can always use more love, more empathy and more light.